Danny Perez’s cult-minded body horror certainly has the right intentions in mind, but struggles to expand on its loud visuals enough to ever truly be affecting.

Despite touring a whole bunch of America’s best and brightest genre festivals through pretty much the entirety of last year, starting at Sundance and working its way through Fantasia and beyond, Antibirth still remains something of a quiet one in the buzz department.

Sure, its cast of indie envelope-pushers are a draw in themselves, and the pulpy trailer and poster teases are at the very least enough to raise an eyebrow or two, but when you finally actually sit down with the (apparently) finished film itself, the real reasoning behind the media blackout becomes a whole lot clearer.

Antibirth is the very definition of a mess, and not in the same sort of untamed, purely intentional way that a madcap cult-hit like We Are the Flesh or an early Cronenberg is. This is much more of just a plain old misfire from start to finish, lacking any real sense of tension, narrative drive or even a consistent enough flair for wilder visuals.

The best of Perez’s cast, the usually punkishly charming Natasha Lyonne, largely sleepwalks through her role here, apparently still on auto-pilot from her Orange is the New Black days, drinking and smoking everything in sight as a moody stoner who finds herself randomly up the duff without any sober explanation. Naturally instead of seeking any real help, she wanders the streets of her snowy local town, drumming up support from a team of equally glass-eyed deadites, a noticeably trying Meg Tilly and Chloe Sevigny, who each come and go, ultimately adding very little.

The problem isn’t so much a lack of vision here; Perez blends a body horror backbone with an imaginative colour palette and seems to know where his beginning and end points are quite clearly, it’s just everything else that very quickly gets away from him. The photography drops into much more network TV than indie horror, dialogue sequences start going literally nowhere and any and all of the (admittedly tiny) Cronenbergian nods are soon lost in a drug-filled plot-line that doesn’t make so much as a lick of sense. 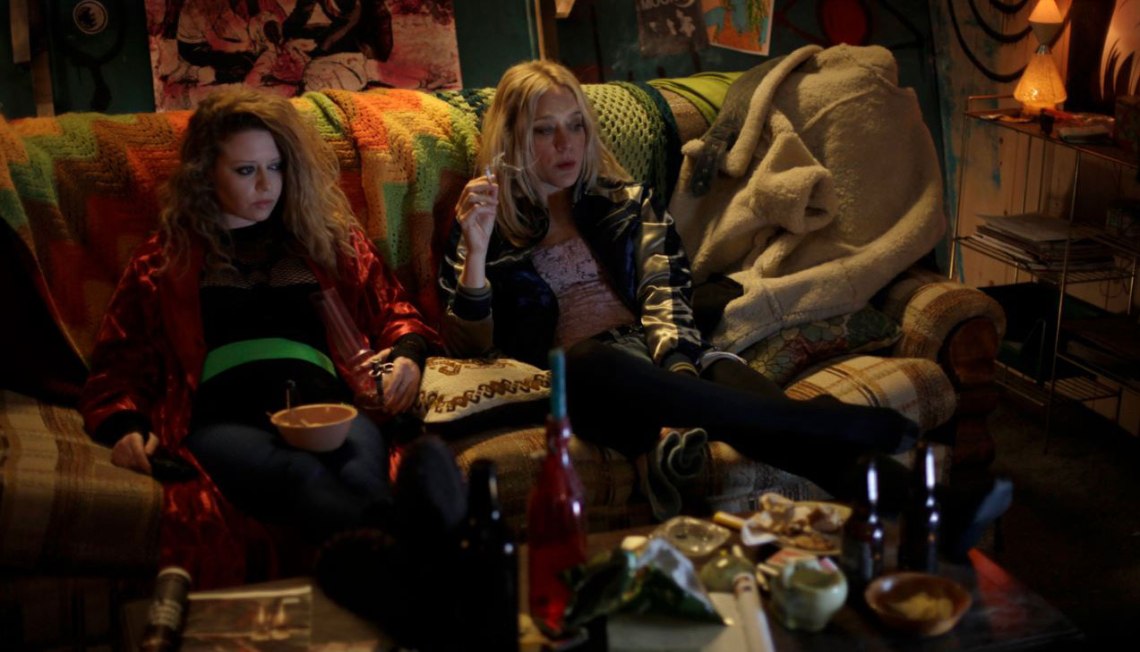 Which is doubly frustrating considering just how close Antibirth gets to being genuinely engaging at times. Perez has plenty of neat (and insanely silly) little practical effects up his sleeves to both amaze and disgust, and the birth-driven third act ends with an extra fun little final sting. There’s just really not enough to the film’s script or overall structure to drag it all together nearly enough.

The effects themselves hit with very little impact, thanks to little more than half a second of build-up, and the finale in question is just totally baffling, seemingly retconning 90% of what came before it in one of the most mind-boggling late-in-the-game switch-ups ever.

Again, all of this might well’ve gone down a treat had Perez, at the very least, signposted his desire to make something more punky, stand-offish and ultimately anti-climactic from the start. But when the hefty majority of his screenplay is plugged full of fruitless character development and conversations about literally nothing at all, instead of the Troma-esque cheapness and gross-out of the finale, it ends up feeling like he’s just run out of money, and tried desperately to throw together whatever he can.

There’s the odd glimmer of something broader here and then, and in theory with a bit more a focussed push from Perez, Antibirth could’ve very easily been the wild-eyed, limit pusher we were all hoping for. But the reality is that the finished product is none of those things: a profoundly messy and sluggish exercise in reminding us all how important proper tension and an engaging central story is to a film.

Antibirth is out in the UK now.