A Ghost Story is very much a film of varying extremes.

Director David Lowery may have only managed to make it thanks to the hearty sum he picked up from shepherding Disney blockbuster Pete’s Dragon last year, but this is about as far from the ranks of the kind of kid-friendly (or even really audience-friendly) entertainment his name now means to many. It wanders, at times almost aimlessly between the excruciatingly slow and the very oddly comic, pretty much entirely plotless, but for its grand overarching attempts to ironically breathe new life into the dusty old medium of the ghost story.

In fact, if Lowery’s work here were to be compared to that of any living filmmaker, it could only really be Terrence Malick. The whole film comes off as a much more lucid and less self-indulgent Tree of Life, battling with all of the expectedly huge, and devilishly tricky themes of existence, in a much simpler and more approachable way.

It’s still far from basic, about as obviously poetic and “deep” as you’d expect from any film hoping to show off an entire philosophical ideal. But more importantly, it’s always understandable in what it’s trying to communicate. It’s an art film for sure, but beyond all of the long, distant silences and occasionally weird visuals, are ideas and stories that, for the most part, actually make sense.

And while a huge (if not the biggest) part of that is down to Lowery himself, writing, directing, and editing the finished product to the very tightest it could possibly be under the budget and time constraints, so much of the film owes a debt to not just its cast, but its composer too.

Lowery’s own regular music man Daniel Hart really goes above and beyond here, tying together Affleck and Mara’s incredibly raw performances, the film’s more grounded drama, with all of the more sensational imagery that follows it. It’s odd at times, clunky at others, and totally indie as sin (much like the Instagram-style 4:3 framing), but aside from the general surrounding craftsmanship, Hart’s score is the very heart of the movie.

But then, I guess, there’s the other side of the coin. The side all about just how stark-ravingly nuts elements of A Ghost Story really are. Because although it’s true that it’s not even in the same league as the likes of Malick when it comes to showing off the obscene and self-aggrandising, Lowery’s film certainly takes a few liberties. 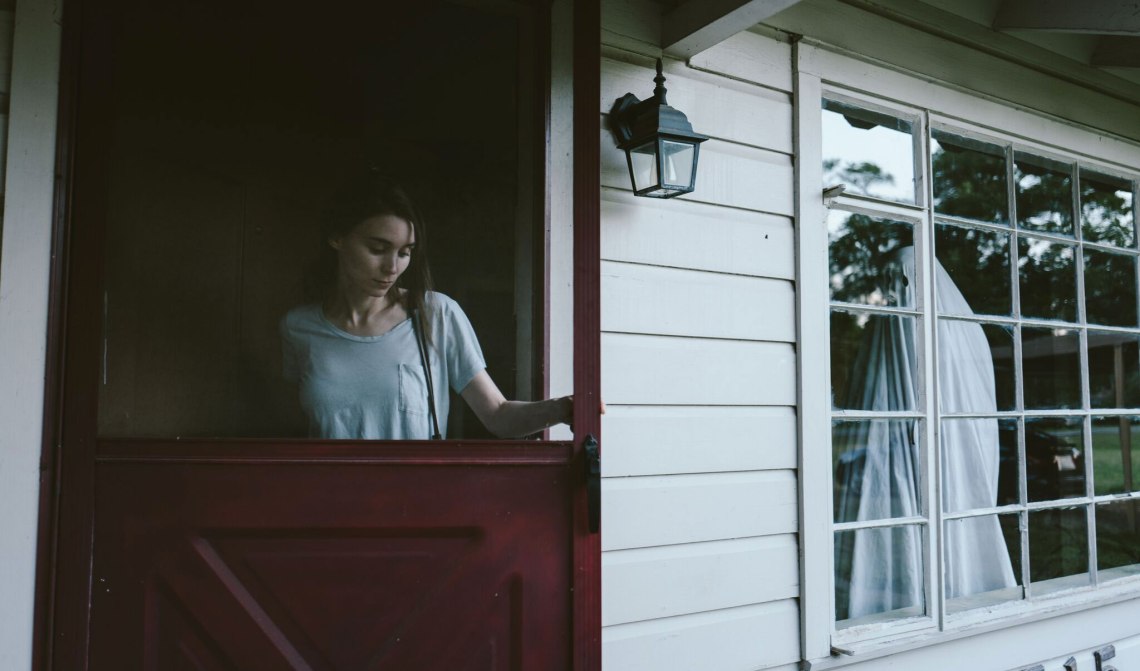 A painfully on-the-nose monologue, for instance, that cuts through the entire middle-act of the film, very much like the gigantic home-wrecking bulldozer that quite literally follows it. Or, most agonising of all, the elongated, and almost entirely unbroken shot of an emotionless Rooney Mara sitting in total silence and eating an entire pie to herself, that ends up standing in for the film’s main approach to grief.

There’s no denying that, for the most part, A Ghost Story is an achingly beautiful look at what lies beyond death, and how humanity defines existence itself. But at times, it just seems much too willing to blindly shoot itself in the foot with some of the most laughably silly sequences this side of the French New Wave. And the worst part is, it’s never really clear whether or not Lowery’s actually in on the joke.

It looks great, sounds great and provides some of the most gorgeously poetic debates of the decade, but it’s unlikely to ever fully escape the pockets of nervous laughter that will no doubt follow A Ghost Story wherever it goes.

A Ghost Story was screened as part of the Sundance London Film Festival 2017.