The world will never have enough monster movies. From Frankenstein to Frankenhooker, the horror crowd will never stop clambering for even more big-beasty-beat-em-up action.

So, in many ways, Primal Rage proves itself a hit before it’s even begun. Special effects and creature make-up man Patrick Magee (a veteran of everything from AVP and Raimi’s Spider-Man to Beyond Re-Animator and Zombie Strippers) very wisely chooses American legend Sasquatch as the nasty of choice for his first turn in the director’s chair. And while the film itself is something of a technical mixed bag, there’s no denying its crowd-pleasing potential.

Dropping the even more mystical subtitle ‘The Legend of Oh-Mah’, Primal Rage digs a little deeper into the general Bigfoot myth, exploring its Native American origins alongside a more standard forest-set survival tale. A recently-released ex-con and his estranged wife (first-timers Andrew Joseph Montgomery and Casey Gagliardi) find themselves cast ashore in the great American wilderness and, as you’d expect, very quickly find that they’re not alone. Aside from a pack of wild, Deliverance-esque locals (rest assured, no squealing piggies here), something huge and hairy lurks nearby, and this time it has… weapons?

Magee and co-writer Jay Lee’s take on the Sasquatch is a little more unusual than the standard angry fur-beast. While he remains both angry and furry, Oh-Mah (as the locals call him) comes complete with both a mask and a miniature arsenal of homemade weaponry, from bows and arrows, to tomahawks, knives – you name it, he’s probably got it stuffed in a crevice somewhere. The overall effect is more Predator-meets-Victor-Crowley than Bigfoot, but it’s a welcome change that certainly brings with it plenty of fan-pleasing nods, even if it does maybe stray a little bit too far at times.

The main problems here are mostly with tone. A half-remembered, much more spiritual sub-plot feels very much at odds with the main fun-and-done action, and because of it, Primal Rage finds itself off-balance at times. We cut from a serious Native American backstory, to a hillbilly making a rape joke, to a mythical monster tearing a man’s face off, jaw-first; to call it jarring would be an understatement. 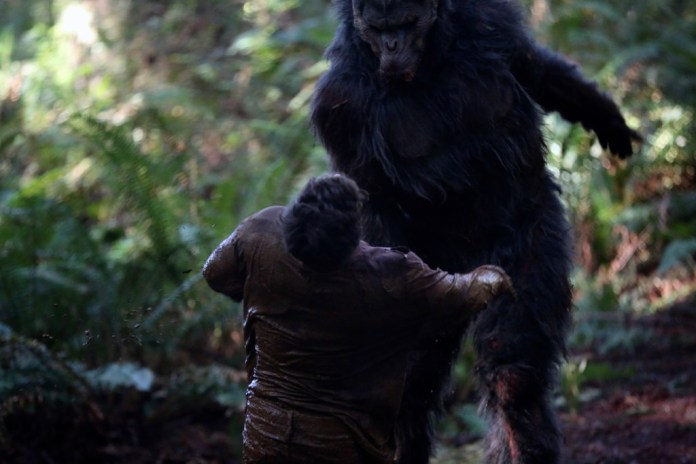 And all-in, this has a bit of a knock-on effect on some of the violence later on too. The serious cutaways mean it gets hard to enjoy the sillier moments, making the wonkier and nastier parts of Magee and Lee’s characterisation really hit hard. Mainly Gagliardi’s lead (and the film’s only) female Ashley, who conveniently loses all her clothes in the first act and spends 90% of the film in very little, bouncing around as the sexualised brunt of a lot of the local’s (and, yes, rather painfully, the monster’s) affections. Her final reckoning never really comes full circle either (Montgomery and his mopey abs take the lead in almost every action sequence), leaving her whole character feeling more like an old-school creature-feature damsel, than a proper 21st-century leading lady.

But although there’s plenty of hard-wired issues here, there’s no escaping the fact that Primal Rage does an awful lot right for the classic monster movie genre. Mindy Pedrick and Laura Lieffring’s SFX make-up work is second-to-none, doling out some of the grimiest practical-effects blood and gore around, not to mention a pair of terrifically terrifying creatures in Oh-Mah and the fabled Whispering Woman. Magee and Lee clearly know what they’re doing with the action, and despite some thoroughly out-of-whack gender politics, there’s no denying that Primal Rage is a bloody good time.

Primal Rage was screened as part of FrightFest Glasgow 2018.